Notice: Function add_theme_support( 'html5' ) was called incorrectly. You need to pass an array of types. Please see Debugging in WordPress for more information. (This message was added in version 3.6.1.) in /var/www/wp-includes/functions.php on line 5831
 Connemara Broth | CheapCooking );

I saw this recipe for Connemara Broth in A Way of Living (Amazon link) by Pia and Simon Pearce. It’s a lovely book with beautiful pictures of their glassware and pottery. I’ve never been to the Simon Pearce restaurants but had stumbled upon this Vermont Cheddar soup from there a few years ago. I saw a used copy of the book for sale for $5 on Amazon a while back and couldn’t resist. I figured that Vermont Cheddar soup was so good I’d likely find another few recipes in it.

Last night soup sounded good and I had half a cabbage to use up so I decided to try this Connemara Broth. I’m not sure why they use the term broth, as it is a thick hearty soup. I always think of broth as being a clearish liquid with no solids. This soup is filled with chunks of potatoes and cabbage. The recipe called for a can of diced tomatoes but I had some cherry tomatoes that need using so I just quartered them and added about a cupful of them to the soup. Between those and the tomato paste, the broth is reddish.

The soup was so good at dinner last night, just what the doctor ordered. Then this morning as I was figuring out what to have for breakfast, I saw the leftover soup in the fridge and it seemed like the perfect breakfast fare, too. It was! Warm and filling with smooth flavors.

I roughly halved the recipe and served it with a green salad last night. I think it would be delicious served with the brown bread in the same cookbook but I didn’t have the energy or the wholemeal flour called for. But I love molasses and think I’ll try that bread with just regular flour and see how it comes out. 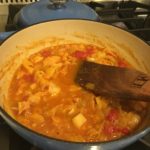