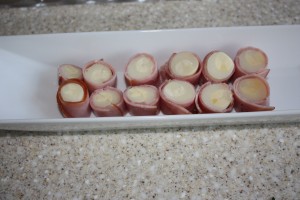 I always debate about trying new recipes when friends come over or sticking with the tried and true. I went with the familiar for dinner the other night but the odd for appetizers, including the hearts of palm with ham.

I remembered an appetizer I made for a family gathering that was a big hit.  You take some thinly sliced ham and wrap it around the heart of palm, then slice it into finger size portions, about an inch long. I first had hearts of palm in El Salvador in 1976, which I wrote about here. These days I mostly just slice them up and add them to salads. The original recipe had you spread cream cheese on the ham before rolling it around the palm heart. I skipped that step this time and it was good, but I think it’s better with the cream cheese. 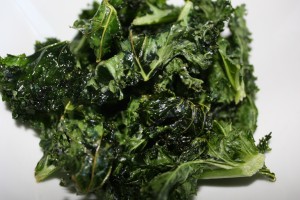 The other odd appetizer I made was from a Jacques Pepin cookbook,Fast Food My Way

. You cut kale into 1-2″ pieces, removing the ribs, then coat it very lightly with olive oil (about a tablespoon for 1/2 pound of kale), tossing to distribute it evenly. Sprinkle very lightly with some salt and lay the pieces in a single layer on a rack on a baking pan.  Bake at 250 for 20-25 minutes, until crispy.

The kale is good to nibble on by itself, and also went well stacked on top of some spinach dip that a friend brought.