I had a few nights this week where it was just me for dinner!  Wow. Not used to cooking for one.  I had some ham so both nights ended making ham paninis with various fixings and a simple green salad with tomatoes from the garden. 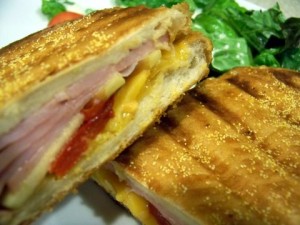 First up was a Panini sandwich with some thinly sliced ham, roasted red peppers, mustard, and cheddar cheese. I think that was all but this was a few days ago. Unlike most of my posts, I didn’t note the recipe but DID take a picture! I was just rooting through the fridge to see what would taste good.

I just used sweet French bread rolls, not a ciabatta loaf as usually called for in Paninis. And I made these in my very simple George Foreman Grill, Black

When the sandwich is done. unplug the grill and then put a wet paper towel or washable cloth on it and close the lid. The steam will clean that grill in no time! 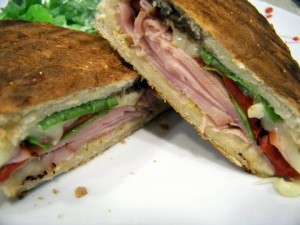 Next up was the same ham, but this time with a honey mustard, some balsamic vinegar on one side, some jack cheese and some fresh basil from the garden. I was going to put some sweet pickled peppers on it but I couldn’t find them in the pantry  so opted for the last of the roasted red peppers again. Different with the basil and jack cheese, more mild and sweet somehow.

Both made a great simple meal with a simple tossed salad. I usually think of sandwiches as lunchtime affairs but don’t really want to cook at lunch, so these were a nice treat.