Notice: Function add_theme_support( 'html5' ) was called incorrectly. You need to pass an array of types. Please see Debugging in WordPress for more information. (This message was added in version 3.6.1.) in /var/www/wp-includes/functions.php on line 5835
 Pumpkin Muffins from a Homegrown Pumpkin | CheapCooking ); 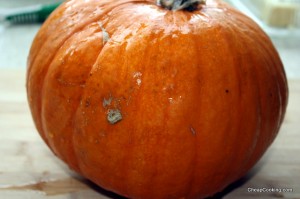 I cooked one of my homegrown pumpkins to make a pumpkin pie this year.  I still have 5 more to cook!  The pie was fantastic!  Everyone that tasted it commented on how good it was.  Shall we just say that real cream and fresh pumpkin tastes way better than canned milk and canned pumpkin?  I cut the pumpkin up into big chunks and roasted it in the oven until I could pierce a fork through the skin. Then I let the pieces cool a bit and scraped them out, saving the seeds for roasted pumpkin seeds and putting the string bits and the skin in the compost.  I ran what was left, including bits of skin through my KitchenAid FVSP Fruit and Vegetable Strainer Parts for Food Grinder

, which works great.  The pumpkin can still have a lot of liquid in it to mess up a recipe calling for canned pumpkin puree so I strained it through some cheesecloth for an hour or so. 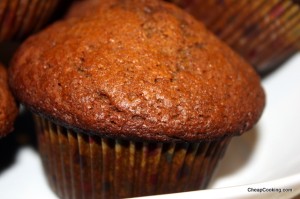 After making the pie I was left with just about a cup of pumpkin puree so tucked it in the fridge to make muffins later.  I used a recipe from The Fannie Farmer Baking Book

. I only had half the amount of molasses called for because my eldest had just used a bunch up to bake her gingerbread house we’ll be decorating in a few weeks so used honey for the other half.  My youngest wasn’t crazy about them. She said they tasted like gingerbread.  I thought they were great! So if you like gingerbread, you might like these pumpkin muffins!  As I’m typing this up I just realized I only put 1/4 cup of brown sugar in instead of 3/4 cup.  Getting old sucks!  My vision isn’t what it used to be with small type!  I did have to bake them a bit longer but am not sure the sugar could account for that.

Pumpkin Muffins from a Homegrown Pumpkin

Previous Post: « Vegetable Soup aka Zuppa di Verdure all’Agliata
Next Post: Round Up of Lidia Cooks from the Heart of Italy »