In many recipes, you are called upon to slice or dice or chop potatoes. A long time ago, I learned that taking a bit of time to be methodical up-front to save a lot of time (and get more even pieces). Early in my cooking days, I just chopped wildly, rocking the knife back and forth, moving it around, until the pieces were cut. But they were inconsistent sizes. This works well when you want to mince, because you can just keep going until everything’s tiny. But if you want to get some uniformly-sized slices or pieces, you need to be a bit more methodical. Generally, you want things to be of a consistent size so they cook in the same amount of time.

The method for potatoes and onions is similar but I’ll describe the onion since that’s what I have a picture of. I’ll try to remember to come back and update this with some pictures of a potato. 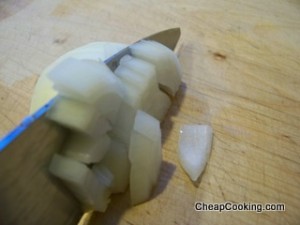 I cut the ends off the onion and then stand it up on one end and cut it in half.  That makes it easy to peel each half. Then I lay the onion down on the flat side and cut down to create strips about as wide as I want my finished pieces.  Then I turn the onion around and cut again, at cross angles to my first cuts.

A potato is just a bit more complicated as it doesn’t have the layers that an onion does. After I’ve peeled the potato, I cut lengthwise into slices that are the width I want the finished pieces to be.  I remove the first slice so I can lay the potato down on a flat edge so it’s stable.  Then I slice lengthwise again, then crosswise.  I cut the piece I removed separately.