My oldest really wanted a snow cone tonight after dinner.  Let’s just say, my kids are long past the day when I might have had any snow cone material around. But we improvised.  I used a grating blade on my food processor to grate the ice.  Next time, I would use a smaller blade but this worked.  Just for fun, and because my oldest is coming up on her 21st birthday, we put the shaved ice into a martini glass. 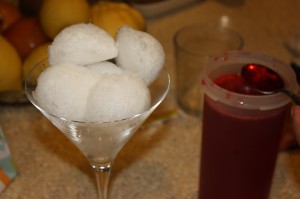 We debated several options for the sweet liquid. We first considered using the lemonade syrup I have in the fridge but she wanted a more traditional snow cone type flavor. I dug around in the pantry and pulled out a pack of cherry Kool-Aid.  We mixed a packet with 3/4 cups sugar and 2 cups water. It definitely hit the spot but next time she would like it more fruity so I would use less water. It gets watered down plenty with the ice.