Several people asked what kind of bread machine I bought. I did splurge. That’s why I made the commitment that I would use it for nearly all my bread, pizza, and so forth.  I bought a Zojirushi BB-CEC20WB Home Bakery Supreme 2-Pound-Loaf Breadmaker, White

and I have been very pleased with it.  I read a lot of reviews. I also have a Zojirushi rice cooker that I’ve been very pleased with and that influenced my decision for sure.  My old bread machine was noisy from day one and you really didn’t want to hear at the end!  This new one is almost quiet.  And I love that it makes a horizontal loaf. There are two paddles in it to mix everything up. So far, it has been very easy to clean as well, another key factor. 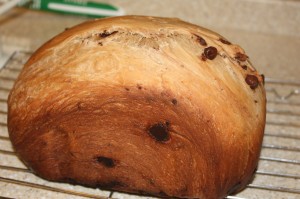 When I bought the machine, the white one was $40 cheaper than what it is going for now.  That’s still a lot of money. But I like fresh bread and while I would make it periodically by hand or with the no-knead version, this is turning out to be the right answer for us.

This machine can also make jams apparently, although I have not yet tried that. I have made a dozen loaves of bread so far, plus pizza several times (using the dough setting).

At the same time I bought this machine, I bought a new bread machine cookbook because I wanted to experiment more.  After reading a ton of reviews on Amazon, I ended up with The Bread Lover’s Bread Machine Cookbook: A Master Baker’s 300 Favorite Recipes for Perfect-Every-Time Bread-From Every Kind of Machine

and I really like all but one of the recipes I’ve tried.  (And that one was okay, just not superb!)