Notice: Function add_theme_support( 'html5' ) was called incorrectly. You need to pass an array of types. Please see Debugging in WordPress for more information. (This message was added in version 3.6.1.) in /var/www/wp-includes/functions.php on line 5831
 Sort-of Buffalo Chicken Sandwich | CheapCooking ); 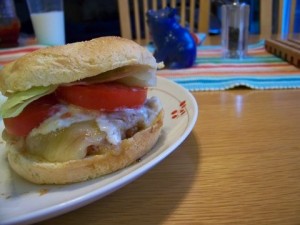 Since neither of us were starving tonight but we still needed to eat dinner, I opted for a sandwich. One of us had had a chicken taco salad for lunch so I didn’t want to do another “salad with meat” thing.  I had these fantastic breaded chicken cutlets from the other night so went for those and pulled some hamburger buns out of the freezer.

I heated the cutlets in the oven at 350 and put the hamburger buns by the vent outlet (where the hot air comes out) to defrost. Not sure all ovens have those but my gas one sure does and it comes in handy for keeping things warm or defrosting.