Where to start? So far I’ve made a handful of recipes from Mexican Everyday (Amazon link)

and they’ve all been great.  I don’t know which was better last night, the grilled roadside chicken with roasted tomatillo salsa or the beans.

The roadside chicken had a marinade of ancho chili powder, oregano, ground cloves, cinnamon, garlic, apple cider vinegar and orange juice.  Wow!  He suggests splitting the chicken by cutting out the backbone and flattening it so it cooks more evenly. I’ve done that before but last night I got the brilliant idea of asking the butcher to do it for me so it was a bit neater than my norm. (And he wrapped up the backbone after asking so I could make broth with it.)  Because the chicken is split, it cooks faster. You can cook a whole chicken on the grill over indirect heat in about 45 minutes. And of course you could use this marinade on chicken pieces as well. 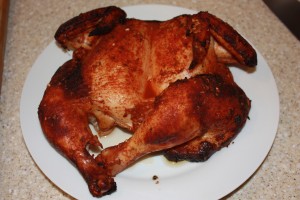 The roasted tomatillo salsa was fun. I’d never cooked with fresh tomatillos before, just canned.  In this salsa, they are split in half and cooked in a nonstick skillet with garlic until soft, then whirred up in the blender with jalapenos and cilantro. After it’s blended, you add a chopped and rinsed white onion. 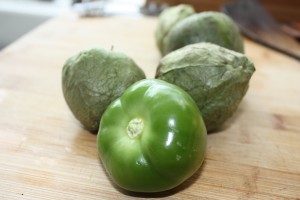 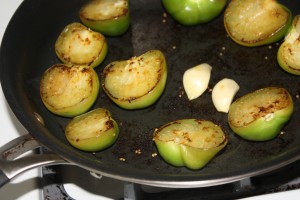 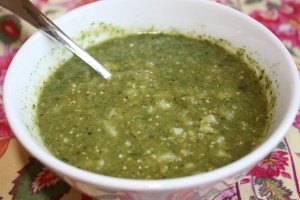 His red rice and pinto beans were super easy and also super good. For the rice, you saute the rice in a bit of oil first, like a pilaf, then add equal parts chicken broth and salsa to make up your liquids and cook as normal.  The pinto beans were cooked with an onion and some bacon grease. I’ve used bacon grease when I make refried beans but adding it to the dried beans while cooking gave them an excellent flavor. 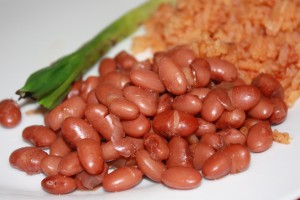 And finally, I made a lime-cilantro salad dressing. 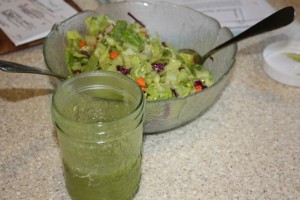 Bayless has lots of recipes from his cookbooks on his web site, which is very cool but won’t stop me from buying his cookbooks as I like all the notes and stories, too.