Notice: Function add_theme_support( 'html5' ) was called incorrectly. You need to pass an array of types. Please see Debugging in WordPress for more information. (This message was added in version 3.6.1.) in /var/www/wp-includes/functions.php on line 5831
 High School Grad Party for 50 | CheapCooking ); 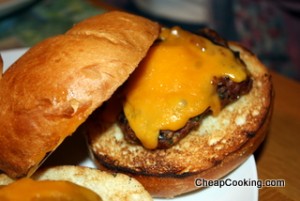 When you’re entertaining, you need to balance money, time and taste.  I just had a grad night party for my eldest and I won’t say it was the cheapest I could have done, but it was reasonable and balanced the time I had available with the money I had available.

My daughter wanted a “simple” barbecue, that is hot dogs and hamburgers. But we were inviting lots of adults, including a few vegetarians and a few who eat no pork.   So first off, I bought all-beef hot dogs. I also decided to buy preformed hamburger patties to save time since we had a few other things going on around the same time.  I decided to add some chicken breasts and a few portobello mushrooms as well.  The hardest part was deciding about how many of each thing to plan on for 45 – 50 people. I figured two hot dogs per person and figured on about half hot dogs, slightly more than half hamburgers, half a dozen mushrooms, and a large tray pack of chicken breasts. (Note: I marinated the chicken breasts in my favorite chicken marinade and split them into two bags. I had one bag left over at the end so just froze them in smaller packs of 2 breasts per bag with some marinade in each bag.  I also had leftover hamburgers, still frozen, and leftover hot dogs, easy to throw in the freezer for later, so those will all get used up.)  We cooked a bit more than we ate last night but had hot dogs for lunch and green salad with sliced chicken and the leftover mushroom sliced up for dinner.

The menu I ended up with was:

For appetizers we had:

And I bought a large sheet cake for dessert. This ended up at about $1 per person and was far better tasting and looking than I could have done! For smaller groups, I would have made dessert but for larger ones this works out great.

Oh I also made two large relish plates for the burgers which included a head of iceberg lettuce, sliced onions, sliced pickles, and sliced tomatoes. Ended up with leftover onions and tomatoes but those will easily get used up in various things or I can always just chop and freeze the onions.

I haven’t added up the cost but my main point was that you need to balance the time you have available and figure out what things might make sense to buy pre-made. While I normally make our hamburger patties, for a large party I felt good about my decision to buy the preformed ones. Likewise the spinach dip. But I bought fresh fruit and made the fruit salad based on what looked good and ripe at the store (strawberries, blueberries, pineapple, watermelon, grapes and nectarines).  A neighbor was kind enough to loan me some fridge space (as well as outdoor table and chairs) so I made the salad up in the morning and refrigerated it till the party started. I did the same with the relish plates for the burgers.

Oh, for the bean dish I took this four bean casserole recipe in the crock-pot and modified it to use vegetarian baked beans instead of the pork and beans and then left out the bacon. It was just as delicious as the original I think and might become my new standard since it’s a bit healthier.

Any of you have tips to share for large parties? This was fun but the largest one I’ve done that wasn’t a total potluck, although I did have some help as noted.  I don’t have an extra fridge or freezer as some folks do so the neighbors’ offer of their spare fridge space was a lifesaver. Same with the tables and chairs I borrowed. Oh, we did buy plastic table cloths to cover all the tables so they looked coordinated by the time we were done!  We bought a dozen helium balloons and tied a few to each table.  We lucked out with fantastic weather and I think the party was a success.