Notice: Function add_theme_support( 'html5' ) was called incorrectly. You need to pass an array of types. Please see Debugging in WordPress for more information. (This message was added in version 3.6.1.) in /var/www/wp-includes/functions.php on line 5835
 Pizzettas! Small Pizzas with Loads of Flavor | CheapCooking ); 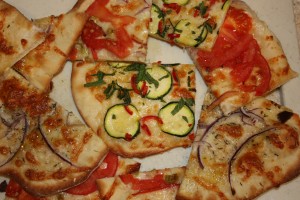 Last night I cooked a few pizzettas from POLPO: A Venetian Cookbook (Of Sorts)

, a cookbook I would likely not have bought without having read about everyone on Chowhound cooking from it.  The pizza dough recipe was pretty classic so use your favorite or this one. All of the pizzettas here are about 7-8″ in diameter, a little personal thin-crust pizza.  That means they cook up in about 6-8 minutes on a hot pizza stone, which would make them fun for appetizers at a party. The lesson I learned from the two recipes I made are that less is more. The ingredients were simple; there was no tomato sauce base.  There was a mix of mozzarella and Parmesan for the cheese (a small handful of each spread across the dough. The two I made from the book had:

I made up a third with a thinly sliced tomato and I made the zucchini one twice, adding thinly sliced red onion to the second one. So make up your dough, knead it well, then let it rise until doubled. Preheat the oven to 425 with a pizza stone in it.

Roll or pat each out to about 7-8″ on a floured surface.