Notice: Function add_theme_support( 'html5' ) was called incorrectly. You need to pass an array of types. Please see Debugging in WordPress for more information. (This message was added in version 3.6.1.) in /var/www/wp-includes/functions.php on line 5831
 Pork Curry with Potato, Pepper and Apple | CheapCooking );

Home » Learn About ... » Cooking for One or Two » Pork Curry with Potato, Pepper and Apple
Jump to Recipe Print Recipe

This Pork Curry with Potato, Pepper and Apple satisfied my need for a warm dish on a cold night. Cooking for one has its challenges–especially if you like to cook! I never want to make anything that has too many leftovers. I like them once for lunch but then I want to cook something new the next night for dinner. I don’t mind cooking the same thing in two different ways, which is what I did this week, though.  I thawed a couple of pork chops and cooked them two different ways on two different nights–and had a bit leftover from each for lunches.

First I made a recipe my youngest shared with me, a pan-fried pork chop with a vibrant green sauce that was similar to this Italian salsa verde. It had some cooked tomatoes with it and I served it with the poached zucchini I wrote up earlier.  It was quite a tasty dinner!

Last night I felt like making something completely different and settled on a pork curry. I found this recipe in 660 Curries (Amazon affiliate link), which seems to have curries made with just about anything you could want. I was drawn to it because it didn’t have any sub recipes and I had almost all the ingredients, substituting green cardamom seeds for black. I halved this recipe and used one pork chop, which gave me a nice balance of vegetables (and fruit) to pork. Taking his suggestion, I served it with a toasted half a ciabatta instead of rice. Potatoes and rice would have been too heavy for me. 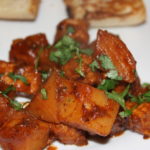 This has a mild kick to it from the cayenne but it is not too spicy.