Home » Learn About ... » Food Storage » Preserving the Bounty of the Garden

The garden is coming in strong finally now that we have some hot weather.  It’s been a wacky year weather wise here. 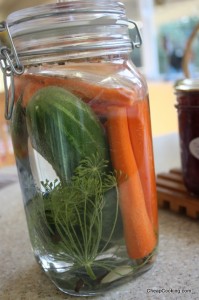 My pickling cucumbers are not giving me as much fruit as in past years, but still enough to play with some pickles.

I’ve dried various summer squash. That’s a new one for me. I’m just planning on throwing it into some soups and stews come winter.  My Roma tomatoes are finally starting to produce so in addition to a pizza margherita for dinner last night I am drying some as well. They’re not in the sun so not technically “sun-dried” but effectively the same I hope!  When I have enough, I will can some as well. That’s why I planted 6 plants!

I planted 6 red cabbages this spring. Earlier I made a batch of red cabbage sauerkraut, with just salt, using a Pickl-It Jar.  It came out really good–if you like pickled things. My children don’t but I do.  I’m trying another batch tonight using this Caldwell’s Starter I picked up.  My first batch came out good without it so I’ll be curious to taste the difference, if any.  I do know I learned to really pack down the cabbage this time. I used the plunger thing from my Vita-Mix!  Definitely got way more cabbage in the jar this time compared to using my hands last time.

I am growing pickling cucumbers but they’re few and far between. Other years they have gone crazy here so not sure why they’re slow this year.  But I do have enough to pickle a quart now and then. I started a quart last night using a friend’s mother lacto-fermentation recipe (just salt, garlic and spices and water, no vinegar).   I’ll let you know in a week or so how they turn out!

A few nights ago I made and canned 3 pints of Dutch Spiced Red Cabbage. It had vinegar, nutmeg, and cinnamon in it, plus honey.  I nibbled on some before canning it and tasted good, sort of sweet and sour but with the warmth of the cinnamon and nutmeg too. The recipe called for mace but I didn’t have any and thought nutmeg would be a good substitute.

I have a quarter of  a large red cabbage left in the fridge to eat fresh and one more medium sized one still in the garden.  Need to do something with it soon as I need the space there to plant the lettuce, spinach, broccoli and kale I’ll grow this fall.  And probably more cabbage… And garlic…

My Italian plum tree is going crazy with fruit this year. Would love some recipes on how to preserve them other than just drying them, which pretty much makes them prunes.  I saw a recipe for chutney that sounded promising, with plum and squash and apples, but I have a LOT of plums this year. And no aphids on the tree this year. Usually that tree is my signal that aphids are on town so evidently we had very few this year.