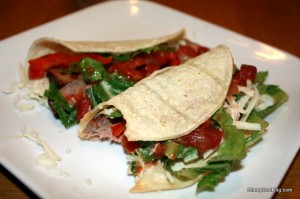 A few nights ago I made my own corn tortillas using my new tortilla press (affiliate link) and made huevos rancheros for myself and a friend for dinner, cooking up some canned black beans with some spices, cooked onions and tomatoes and using my own chickens’ fresh eggs! Cheap and delicious!

I had leftover corn tortillas and wrapped them up and refrigerated them. Note that the picture is from a different night. My homemade tortillas did not come out so pretty!

For a celebratory dinner for my eldest’s first dinner home in a while, I splurged on some good steaks and grilled them the other night.  I just put a bit of olive oil on them, sprinkled garlic salt and seasoned pepper and  barbecued them until medium well done.  Served them with some baked potatoes and fried onions and salad from the garden.

Tonight it was just me for dinner. I took the last tiny bit of steak that was left (had cooked two smallish steaks for the 3 of us) and sliced it up and barely reheated it.  Reheated the corn tortillas in a tortilla warmer

similar to this one (affiliate link). Reheated the rest of the black beans from the huevos rancheros night.

Made soft tacos with the steak, black beans, some cheese, sour cream and sliced avocado.  Delicious!

As much as I like experimenting with different foods, it’s much more efficient to have a “Mexican week” rather than a Mexican day in my house. Normally, I would have cooked up the black beans from dried beans, saving even more money but the canned ones are awfully convenient and you can reheat them with some “additions” that spice them up. I’ve got some leftover pork chops and am thinking I can slice them up and heat them up with green salsa and make something similar to chili verde burritos one night.   The pork chops were marinated in an Asian style marinade but I think they will be fine with the tomatillo salsa.