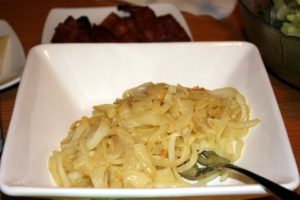 Whenever I barbecue a steak, I always saute some onions to go with it. This is so easy to do but adds so much flavor! Peel the onion, cut it in half, then cut those halves into slices. Heat a bit of olive oil in a pan over a medium-low heat. You want to cook the onion slowly. There’s almost nothing worse than the smell of burned onions so watch the heat! On the other hand, if you have it too low it will take forever, although they will still taste good.

Stir the onions periodically. I like to season with a bit of garlic salt. Sometimes I add minced garlic but usually I’ve got enough other dishes to deal with that I “cheat” with the garlic salt. But they’re also good with plain salt or even unsalted. If they get softened before your steak or burger is ready, just turn the heat way way down (or even off) and let them sit.

If you’re making burritos, follow the same general directions but add in some sliced red and green peppers and definitely add the minced garlic.

You could also use these to top a baked potato, which I usually make to go with the steak. Sometimes I almost think I could just eat the baked potato and sauteed onions, as long as I had butter and sour cream on that potato with the onions. But what tastes best is a bite with a bit of everything: steak, potato, onions, butter, and sour cream. Mmmmmm!