Notice: Function add_theme_support( 'html5' ) was called incorrectly. You need to pass an array of types. Please see Debugging in WordPress for more information. (This message was added in version 3.6.1.) in /var/www/wp-includes/functions.php on line 5831
 Vietnamese Breaded Pork Chops and Stir-Fried Asparagus | CheapCooking ); 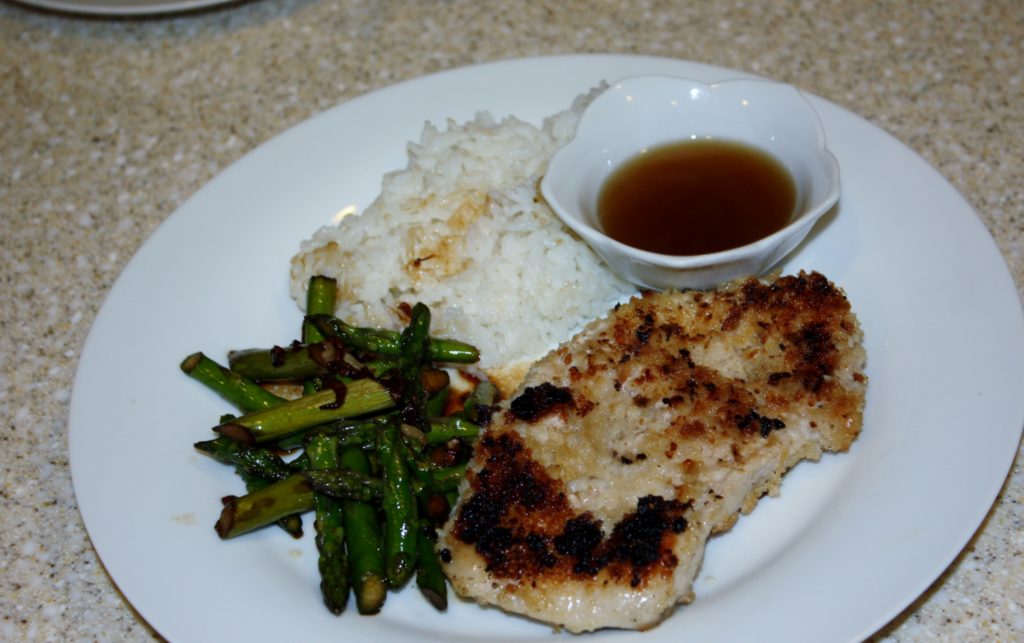 I was on my own for dinner the other night and pulled a pork chop out of the freezer to defrost, not sure what I was going to do with it. I ended up making these Vietnamese breaded pork chops, which was a far cry from what I had in mind initially. But I’m glad I experimented!

I’m having a picnic lunch with my youngest this week and thought it would be fun to bring banh mi. I’ve made Hanoi Grilled Chicken Banh Mi before and we loved them. I began thumbing through The Banh Mi Handbook (Amazon link) and decided to do something Vietnamese-like with the pork. I went over to the Viet World Kitchen blog, which is a fantastic blog and quickly found two things to try.

The first was her mom’s garlickly pork chops. I like recipes like this. “Season generously with garlic, salt and pepper!” I used LOTS of garlic and let them sit for half an hour or so while I made the nuoc cham dipping sauce. I pounded the pork chop out thin and cut it in half. I used panko bread crumbs, pressing them into the meat before sauteing in canola oil.

I also decided to make her stir-fried asparagus without the shrimp. I pretty much just eyeballed everything since I was cutting the recipe back so much. I didn’t have any oyster sauce or Shaoxing cooking wine. I just left the oyster sauce out and used mirin instead. I would have used sherry or just white wine if I didn’t have the mirin. I wasn’t going for authentic–just good!

And good it was! Now I want to buy her Vietnamese Kitchen (Amazon link) book.