I wanted to make an apple pie tonight but didn’t feel like anything as heavy as two crusts. Yet, I didn’t want to just make a crisp or cobbler either. I thumbed through a few apple pie recipes, having some vague memory of a one crust pie I’d seen with some sort of custard. I saw one for a ricotta apple pie, but opted for an apple custard pie I saw in Better Homes & Garden New Cookbook

, one of my old standbys. 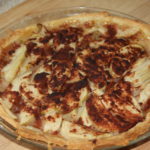 This single crusted apple pie has a light custard that binds the apples together.

This was really good. The custard-like stuff with the apples is fairly light, certainly lighter than a second crust would be. Definitely a repeat!