I had originally checked Around My French Table: More Than 300 Recipes from My Home to Yours

out of the library and then went and bought my own copy, and am glad I did. It’s not that I’m into “French” cooking per se, but I do like to cook good food and this books seems chock full of it!

Tonight a few women I’d gone to high school with came for dinner. We’d met for lunch a few months back and enjoyed reconnecting, so after several attempts we finally managed a dinner together. I wanted a meal that I could be “done with” by the time they arrived but one that could wait for us to be ready to eat so we could sit and visit (and walk out and see the chickens!) and then eat when we were ready. 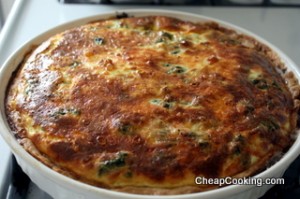 I settled on soup and quiche. Quiche is good warm or at room temperature so I timed it so it finished baking just as they arrived.  I basically used this recipe, but mixed Swiss and Cheddar cheeses, then added some grated Parmesan on top. I also used just one onion, but added half a pound of baby spinach, steamed, squeezed dry and chopped. I skipped the nutmeg and cayenne as well.  I think it was especially good because I used up some heavy whipping cream we had left over from the strawberry shortcake cupcakes my eldest made when she was home this weekend. 😉

I made two soups, this asparagus soup and a corn soup.  I like the flavor of asparagus but had never had an asparagus soup. Being St. Patrick’s Day, it seemed appropriate to serve a green soup!  It was very pretty –and very tasty! The corn soup was good but a trifle herby for me. I think too much rosemary.  In both soups, the leftover bits of vegetables were used to flavor the broth. For the corn soup, the corn cobs were set in hot milk to steep, while the rest of the soup was being readied.

I was lazy and chose to just chop off the tough ends of the asparagus rather than peel them, but I did still cook them to create the broth. (The original recipe has you peeling and trimming and tying all the loose bits into cheesecloth and cooking with the asparagus. I just cut off the rough ends and then removed them to the compost bin when I was done.) I also halved her recipe– except for the garlic 😉 — which was great for 3 of us for dinner with a small cup left over.