Notice: Function add_theme_support( 'html5' ) was called incorrectly. You need to pass an array of types. Please see Debugging in WordPress for more information. (This message was added in version 3.6.1.) in /var/www/wp-includes/functions.php on line 5835
 Black Bean Quesadillas / Fried Tacos | CheapCooking ); 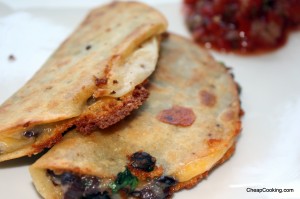 I am enjoying Love Your Leftovers

(affiliate link) by Nick Evans.  I cooked up his Spicy Black Beans yesterday morning and then realized I could try out his self-described cross between tacos and quesadillas.   Basically, put a thin coating of oil in a pan, add a corn tortilla, 1/4 cup black beans and a handful of cheese.  As it starts to cook, fold the tortilla in half, then keep frying until crispy.  Carefully turn the tortilla (towards the fold) so the beans don’t fall out, then crisp up the other side.

I had these for lunch with some salsa and they were quite good and filling.  I wish I’d has some sour cream to go with them but I forgot to replace the sour cream when I had to throw out everything in my fridge.  Guacamole would be good too! These would be fast to whip up with my Dressed Up Black Beans, too.

He also has a cute idea for making huevos rancheros in muffin tins but I opted for a lighter version for breakfast and just topped some warmed black beans with a fried egg and salsa.  It was excellent!  But I forgot to take a picture.