Last night I made chicken pot pie with mushrooms and leeks for dinner. I picked up some boneless skinless chicken thighs on sale the other day, with no clear plan as to what I was going to make.  I used to plan out my meals every week and sometimes I still do that. But when I’m often just cooking for myself, I tend to just pick up something on sale or something that catches my eye, both in terms of meat and vegetables. Sometimes I’ve seen a recipe that I want to try when I’m browsing through a cookbook but often I just think of things that sound good. The other day it was chicken and mushrooms that caught my attention. I thought about pasta with a cream sauce. I thought about an Asian stir-fry. I thought about our favorite chicken and rice. I browsed through some books and stumbled upon a chicken and mushroom pie from Nigel Slater’s Eat (affiliate link), a fantastic cookbook brimming with ideas. Often they’re not detailed recipes and usually there are suggested variations. I cut down the quantities, added leeks and carrots and used water I’d saved from cooking potatoes for bangers and mash rather than the white beer he suggested. (I thought I would make some soup with it. That’s how well I’m planning these days!) I totally used his idea of using puff pastry for a top crust because I’d just seen some languishing in the freezer. I like his chatty style and how the book is organized. (This was in a chapter called “Under a Crust.”)

I used to always make chicken pot pie with leftover chicken or turkey. It was something I made to use up things not something I set about to make from scratch.  But Slater’s had me try a few new ideas for pot pie, including cooking the chicken in milk and then using that milk to make the gravy. This pot pie has no dairy, just flour and broth to make the gravy. Last night, I just chopped the chicken thighs and cooked them in some oil, as he suggests in Eat. I used two boneless skinless chicken thighs. I wanted to cook something that would only be three or four servings.  I like eating leftovers for lunch once or twice but I get tired of them after the third time.

I don’t think I’ve used mushrooms in a pot pie before.  I used to not like mushrooms. I didn’t dislike them but I didn’t like them either. I’d eat them if the were there.  Suddenly this last year mushrooms taste really good to me and I buy and cook them frequently.   They were really good in here, since I went light on the meat. And cutting them in quarters rather than slicing them meant they still had some good “meaty” texture. 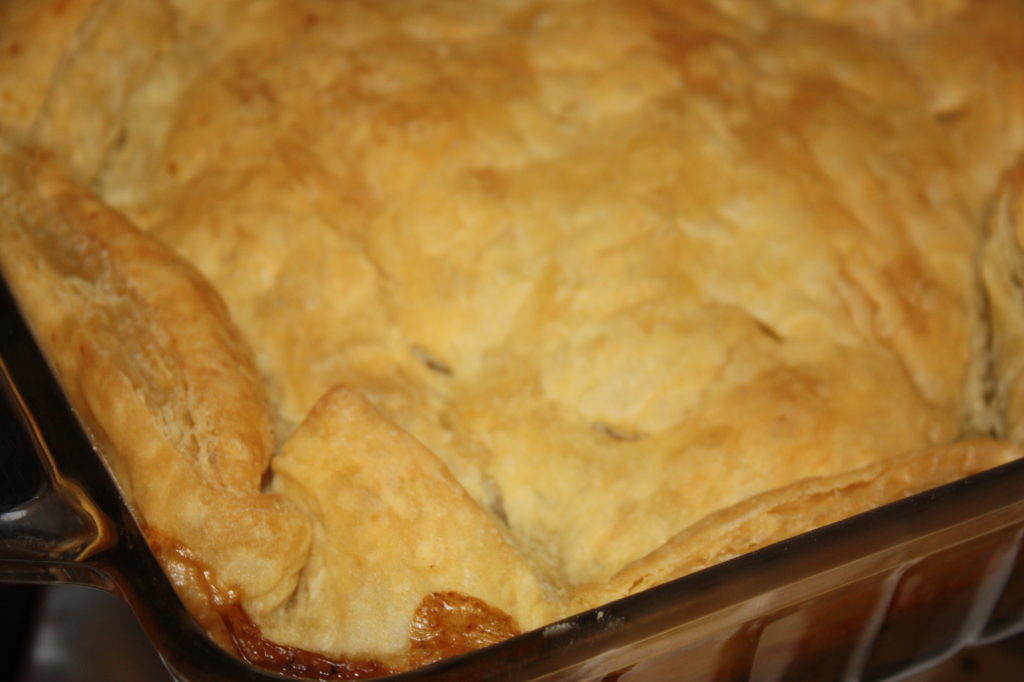