Notice: Function add_theme_support( 'html5' ) was called incorrectly. You need to pass an array of types. Please see Debugging in WordPress for more information. (This message was added in version 3.6.1.) in /var/www/wp-includes/functions.php on line 5831
 Crispy Sweet Potato Wedges | CheapCooking );

I’ve made these Crispy-Coated Sweet Potato Wedges from
Cravings: Hungry for More by Chrissy Teigen (Amazon link) three times so far and I know I’ll be making them again. They’re coated with egg white, which is mixed with rice flour (or cornstarch or potato starch) and Lawry’s Seasoned Salt, which I haven’t used in ages. Growing up we would put that on popcorn but I don’t think I’ve ever cooked with it other than that, although now I’m wondering why.

They go together in about 10 minutes, during which time you preheat a pan with a bit of oil on it. They take about 30 minutes to bake. You just have to flip them over once about halfway through.

Once I forgot to preheat the pan and the flavor was still good, but I missed the crispy texture.

I remember using egg whites in a recipe for baked French fried potatoes, from a long-ago diet book with Oprah Winfrey’s name on it. Aha, it was from In the Kitchen with Rosie, from 1994. Thank you Amazon. Adding the rice flour to the egg whites really ups the game on the texture. 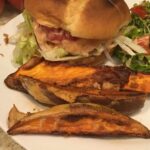