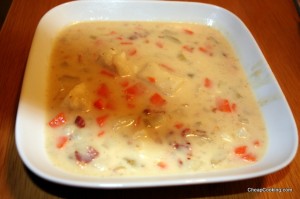 This fish chowder is full of potatoes, carrots, celery and onions, with a milk and chicken broth base. I’ve made it in the past with tilapia but last night I used some frozen cod instead.  I like it with tilapia much better but maybe if you like fish more than I do you’d like it with cod!  I also left out the dill last night by accident.

Allow a little over an hour from start to finish, but there is a long stretch in the middle that just requires time and no hands-on effort. Sorry about the shadow on the picture!