A while back I had bought The Indian Slow Cooker: 50 Healthy, Easy, Authentic Recipes

and I finally got around to trying a few recipes.

I only have one slow cooker so the day before I made up the Cauliflower and Potato dish, then reheated on the stove last night. The cauliflower stayed nice and firm. I had been afraid it would get mushy in the Crockpot.  I  also started the chicken marinating in yogurt so it could marinate overnight. 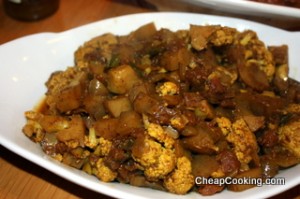 At lunchtime, I started the Chicken Tikka Masala. The author, Anupy Singla, has a blog online so you can get the recipe here if you want to try it out. 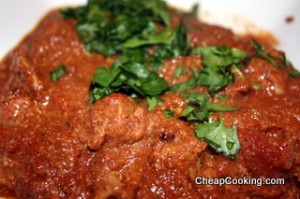 I had to take my car into the shop and ended up sitting in the lounge yesterday after lunch for a while.  Coincidentally, there was an Indian cooking show on and she made paneer cheese from milk and vinegar, then dipped slices of it in batter and fried them.  I came home and found the recipe online here so decided to make that too!  I served them with a bit of Major Grey’s chutney and some tamarind sauce to dip them into. They were really yummy. 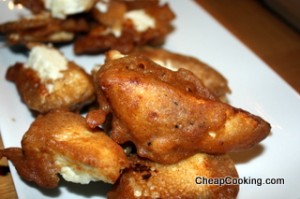 I rounded out the meal with a simple salad. I left things separate so my daughter didn’t have to eat the onions. 😉  But it is just sliced onions, sliced tomatoes, sliced cucumbers, with some salt, pepper and lemon juice on top.  This was a suggestion from the back of the book but I skipped the spices for my daughter.  That was so good I made more and ate it as a late night snack while watching an episode of Medium. 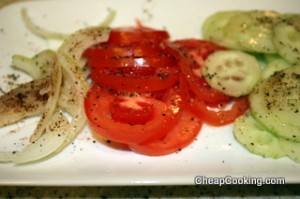