Home » Learn About ... » Leftovers » Things to Make with Leftover Potatoes: Baked and Mashed 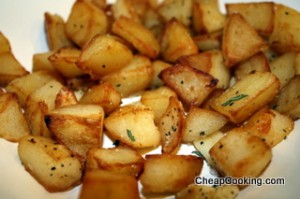 I made baked potatoes the other night for dinner but one child didn’t eat hers so I was left with an extra, which I stuck in the fridge. The next morning at breakfast the same child begged for sauteed potatoes (just peeled, diced, and fried in a bit of olive oil and butter usually) but they take a while to cook and it was a school morning. I said no initially but then opened the fridge to get my egg out for my breakfast sandwich and spied the lone potato sitting there. Told her she was in luck.

Just to make it taste extra good, I diced up the leftover baked potato (peel and all) and cooked it up in a bit of bacon grease.

It smelled and looked so good I stole about a quarter of that fried potato and decided to scramble up my egg with it. I threw in a few bits of cheddar cheese and put it all on the English muffin I had toasted. Boy it was good!

A few days later I made my new favorite meatloaf recipe and made mashed potatoes to go with it. Actually, I made the Potatoes Romanoff due to one daughter’s urging when she saw me cooking up the potatoes for mashing. We had some leftovers and I spied them in the fridge when I reached in for my egg this morning. At first I thought I might use them up tonight by making potato croquettes, adding an egg and mashing them into patties, dipping in bread crumbs and frying them, sort of the poor man’s Tater Tots.

But then remembering how good the potato and egg sandwich had been the other day, I pulled out the bowl of leftover potatoes and grabbed just enough for one patty and mashed it together. I already had some butter melted in the frying pan for the egg so I added a bit more for the potato and plopped it in when it was melted. Cooked it until it seemed heated through and was just a bit crispy on the outside, then added the egg to the other side of the pan and did a “country scramble” (where you just scramble the egg in then pan rather than beating it with a bit of milk in a separate bowl before cooking). Toasted the English muffin, put a thin slice of cheddar on it, put the mashed potato pancake on top, then added the egg to that, and topped with the other half of the muffin. It was very good! Totally different texture with the mashed potatoes rather than the diced, but equally tasty.