Yesterday I got some Bacon Rub and Ketchup Salt from JD Foods to try out.  This is nothing I ever would have purchased but it sounded fun, so when they offered to send me some for free to try out, I said sure. (Note: Even though they sent me the samples for free, the opinions here are mine!)

I decided to try them with some burgers and then the June/July 2011 Every Day with Rachael Ray (affiliate link) caught my eye because of the burger on the cover. It had onion rings.  I love onion rings but rarely make them. I rarely buy this magazine but there are several ideas in here that caught my eye.

I didn’t want to risk alienating my family and ruining a good burger so I just served the Ketchup Salt and Bacon Rub at the table.    They recommend sprinkling the Bacon Rub on the meat and letting it sit for a few hours, as I normally do with rubs, but we just sprinkled it on at the table.  Since I’d made up Rachel Ray’s Red Ranch Dressing for the burgers, we didn’t do much with the Ketchup Salt this time around, but the Bacon Rub was a bit hit.

Fried onion rings were bad enough health-wise and adding bacon to this burger would have likely caused some serious damage. But we got the flavor of bacon without the fat (or mess) of actual bacon!  I could see adding some to various salads too, as well as other meats to grill.

For the record, this was one of the best burgers we’ve had in a long time. The onion rings were fantastic and the Bacon Rub added some extra great flavor. 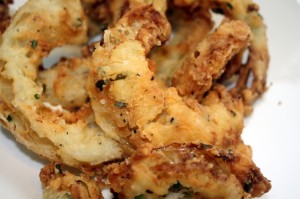 I used toasted sliced sour dough for the bread, grass-fed beef mixed with just a bit of Worcestershire sauce to keep it simple for the burgers (rather than my usual with horesradish and cracker crumbs).  Served the burgers up with some sliced tomatoes and lettuce.

Recipe for the Buttermilk Onion Rings and Red Ranch Sauce are here.

You can buy Bacon Rub here or at many grocery stores.