I was sent the cookbook “All You, Eat Well, Save Big” to review. It is a nice cookbook, with pictures of each meal, nice easy suggestions for side dishes and recipes for the main courses.  They calculate a price per serving for each meal so you can get a rough idea of costs (although your mileage may vary of course and different ingredients can be quite different prices in different areas and at different times of the year).

I’ve got 5 copies of this cookbook to give away. So enter a comment by 12pm PST  Friday Feb 19 mentioning the book or this recipe and I’ll select 5 random commenters to win!  For those of you that don’t win, they’re offering a $1 off coupon bringing the price down to $11.

I’ve only tried one recipe so far, but I’ve got several bookmarked to try later. I’ve just been remiss in reviewing this and wanted to get the review out. The publisher also sent me several issues of the All You magazine, which I’d not seen before. My teenager daughter enjoyed several of the articles on makeup and clothing and I saw several recipes in the magazines that I would like to try as well. Both the magazines and the book have several coupons in them –and for things I actually buy, which is unusual, like Worcestershire sauce and Mahatma rice ($1 off each, as well as 4 other products).    The only drawback to the book and magazine that I can see is that it seems to only be available at Walmart.  But if you’ve got one of those near you, this is worth checking out. Skim through the recipes and see if it’s something you’d like.

Tonight I made the Parmesan Pork Chops.  This is very close to how I make chicken cutlets but I somehow never thought to do it with pork chops before. Even my daughter that “doesn’t like pork much” enjoyed these tonight.  I served with some applesauce, baked potato and green salad.

These were delicious with some applesauce, a baked potato and green salad. 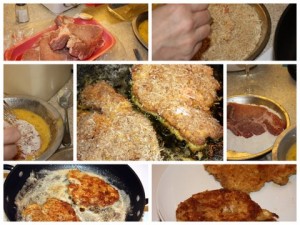 Remember: Enter a comment below before noon on Friday February 19  for a chance to win one of 5 copies being given away!