Notice: Function add_theme_support( 'html5' ) was called incorrectly. You need to pass an array of types. Please see Debugging in WordPress for more information. (This message was added in version 3.6.1.) in /var/www/wp-includes/functions.php on line 5831
 Roasted Potatoes & Brussels Sprouts Recipe | CheapCooking ); 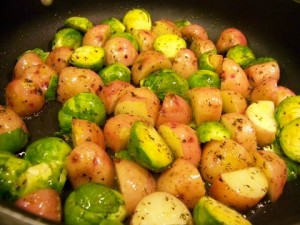 Okay, I really had a plan for using my freezer stash but then on the way home from an after-school thing tonight, my youngest reminded me we needed to swing by the grocery store for a key item. Once we were there she started riffing on various dinners we might have tonight. First it was chicken caesar salad, then it was this, then it was that. Walking through the  produce section she spotted some Brussels sprouts and said “Oooh, put some of those in a pan with some red potatoes and olive oil and ‘stuff” and cook them up. That would go great with steak!”

Do not shop when you are hungry!

Although really, this was not a total splurge. I picked up some Brussels spouts and small red potatoes, both in season, and the cheapest steaks that were on sale. I spent $1.50 on the Brussels Sprouts (and there are leftovers), $2 on the potatoes, and $8 on the steak (lots of leftovers which WILL get used up!).  We ate less than half the steak tonight so lots of leftovers for lunch!  So maybe$2/serving tonight. A bit high but for steak! 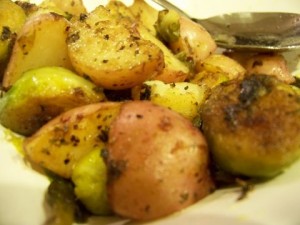 Heat a heavy skillet with of olive oil and add the potatoes and Brussels sprouts. Cook a few minutes until browned on one side and then stir to get another side down onto the hot side of the pan. Sprinkle with the seasonings (or experiment with your own).

Brown a few more minutes. then add the chicken broth and stir, then cover and cook until the potatoes are s0ft (test with a fork). Then remove the lid and crisp up everything and serve.

This went great with some barbecued steak ( bought on sale and sprinkled with garlic salt and seasoned pepper and a simple green salad.)