I have several great recipes for roasting smaller turkeys, say under 18 pounds. If you can easily turn the bird on its side, I like this one.  I haven’t yet started brining, as is all the rage. I bought a fresh turkey at Costco for .89/pound. I followed the guidelines from The Perfect Recipe

, which hasn’t failed me yet.

I rubbed some butter all over the bird and salt and peppered it. Inside the cavity, I put some chopped celery, carrots, and onion, plus some fresh parsley and a bit of dried thyme.

I put the turkey breast side down on an adjustable V-rack, inside a large roasting pan. I used some kitchen twine to truss the bird a bit, and hold the wings in close to the body. I used a few pins to pin up various other loose parts. I poured a cup of water into the bottom of the pan. Oh, when I cleaned out the turkey I put the neck in a larger saucepan (I had to break it in half to fit it) and added the gizzards and heart, threw in a carrot and a stalk of celery and half an onion, then covered with water (at least a quart). This simmered very low until the turkey was done.

And here’s where things varied from my normal.

I turned the bird then, breast side up, and baked another hour still at 250, basting again. When the bird is as big as this, turning it can be a bit tricky and I would recommend two people. Have one hold the pan and maybe the rack if needed while the other uses old clean towels (or paper towels in a pinch) to flip the bird over.

For the 5th hour, I basted and turned the heat up to 400. In another hour, it was done perfectly. My thermometer read a little lower than is suggested but my brother pulled on the wing and leg and pronounced it “almost overdone.” I pulled it out and covered it very loosely with foil while we popped all the side dishes into the oven (dressing, sweet potato streusel, green bean casserole, and creamed onions), while I started the rolls baking in the convection oven above.

After half an hour, I lifted the turkey up and drained all the juices into the pan, then moved the bird onto the cutting board for my brother to carve while my mom and I made the gravy. We need LOTS of gravy so don’t bother skimming much out. We place the roasting pan over two burners and turn to medium. We just sprinkle flour over and stir it in until enough flour has been added to make a paste. We stir that another minute or two, then started adding the broth we made from the neck and gizzards, using a whisk to incorporate it. We kept adding broth and simmering and stirring until the gravy was the consistency we like. It needed no salt or pepper to be declared perfect! 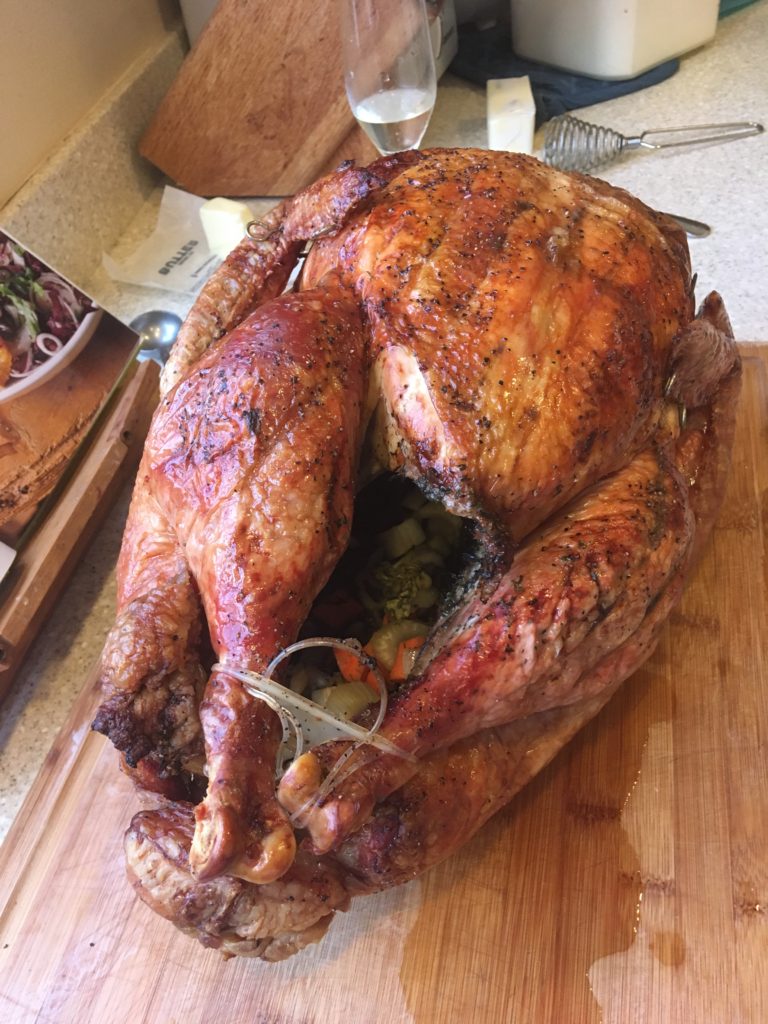 The turkey truly was perfect. The thighs and dark meat were done thoroughly. The breast was also fully cooked but not dried out. My brother is a convert. He mentioned that when I’d cooked the prime rib from this same cookbook a few years ago he’d been doubtful but it had also been PERFECT and he’s saved my writeup to use later. So now he’s a convert to this lower temp roasting for larger birds.