Notice: Function add_theme_support( 'html5' ) was called incorrectly. You need to pass an array of types. Please see Debugging in WordPress for more information. (This message was added in version 3.6.1.) in /var/www/wp-includes/functions.php on line 5831
 Sesame Ginger Salmon | CheapCooking ); 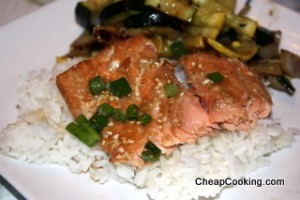 If you cook dinner every night, you know the hardest part is sometimes just coming up with the menu!  I challenged my daughter to plan dinner. I was happy to do the cooking but I was brain-dead.  I’d bought some frozen wild salmon at the grocery store and wanted to cook that. She found this recipe and I had everything we needed. I’ve now made this twice. Both times I’ve messed up and added the toasted sesame seeds to the marinade instead of sprinkling on top.  It’s still good!

I didn’t change anything other than I made less salmon and the same amount of sauce. I like sauce and marinade.  I served it with plain steamed rice and grilled asparagus one night. I don’t remember the other time. And I  have no picture because I was taking a break from blogging.  I will make it again for sure though. And maybe I’ll remember to not add the sesame seeds to the marinade.

Oh and tip of the day. The easiest way to peel fresh ginger is with the back of a teaspoon.  Just scrape it and the peel comes right off.  I used to use a sharp knife to slice the peel off but you always cut off a ton of ginger as well.  The scraping works way better!