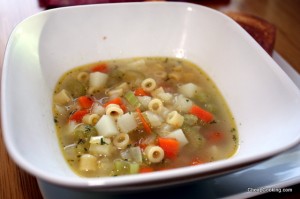 I wanted a simple vegetable soup the other day to go with some grilled cheese sandwiches. It had turned cold here suddenly and soup seemed a good antidote.  I pulled a quart of homemade chicken broth from the freezer, some pasta, an onion and a potato from the pantry, and some carrots and celery from the refrigerator. If I’d had different vegetables I might have added chard, spinach, turnips or whatever. But the vegetable bin was unexciting so just went with the carrots and celery.

I heated some oil in a pot while chopping the onion, celery and carrots, adding them to the pot as I went. I cooked them until softened, then added everything else and cooked at a low simmer until the vegetables and pasta were done, seasoned with a bit of parsley, salt and pepper and served with some grated Parmesan at the table.