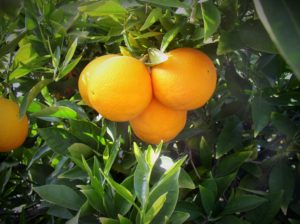 Oranges on the Tree

I got this idea from one of those fundraiser cookbooks. I love those! This was one on Mexican cooking that my nephew was selling a few years ago for his high school Spanish class.

Peel some oranges and slice crosswise (so you end up with circles of oranges). Put them in a bowl. Sprinkle with cinnamon and sugar. Refrigerate an hour or so if you have time, but it’s almost as good if you do this just before serving.

Now, I would normally not put sugar on a sweet fruit. And I’ve done this before with just the cinnamon, which is nearly as good if you’ve got sweet oranges. But for whatever reason our oranges are a bit tart this year. They turned orange earlier than normal, so we made a few batches of great candied orange peel for Christmas. And they make great juice for breakfast, much easier since I bought a juicer kind of like this one, Black & Decker CJ525 CitrusMate Plus Citrus Juicer

. Mine was a Krups but I don’t see one on Amazon these days. Anyway, with a tree full of oranges right now, we’re juicing and slicing pretty much every day!

The juice is great in the morning, but the fruit is just tart enough that it’s a bit tough to eat on its own yet. But slice and sprinkle some cinnamon and sugar on it and it makes a fantastic dessert.

Previous Post: « Beef Gravy without Drippings When You Need Beef Gravy In a Hurry
Next Post: Easy Pulled Pork in the Crockpot »