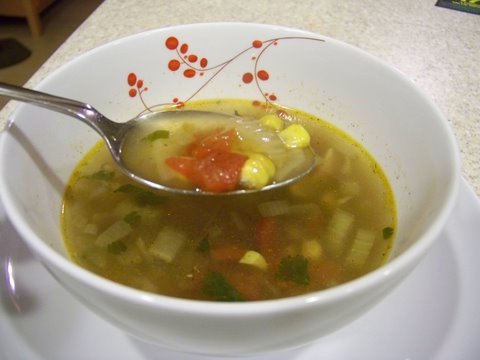 I wanted some soup for lunches later in the week so cooked this up to go with the carne asada soft tacos I was making for dinner. I wanted something Mexican oriented and with some vegetables so played around a bit and came up with this soup. I used some corn I had frozen after we had leftover corn on the cob. I just sliced it off the cob and froze it. I liked it in the soup because it was larger chunks of corn rather than just individual kernels.

This could have gone any number of directions depending on what I had found while rooting through the freezer and vegetable bin.  If I’d wanted a lighter soup, I’d have left out the chicken but I was thinking this would make a nice lunch for me later. If I’d wanted a heavier soup I would have added some cooked beans and maybe some potatoes or rice. Also, if I’d had extra salsa without the avocados I would have added that instead of or in addition to the fresh tomato from my garden.

Mmm!  Could also add some diced avocado, grated cheese and crushed tortilla chips if you wanted a heartier soup.