Notice: Function add_theme_support( 'html5' ) was called incorrectly. You need to pass an array of types. Please see Debugging in WordPress for more information. (This message was added in version 3.6.1.) in /var/www/wp-includes/functions.php on line 5835
 Spicy Shrimp in Coconut Sauce | CheapCooking ); 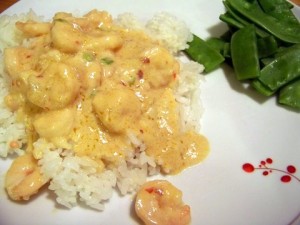 A friend passed along some older issues of Cooking Light magazine last weekend. I got fixed on using up some frozen shrimp I had  so browsed through a few issues for some ideas.  There were several that sounded quite good and I settled on this one.  I made some steamed rice and snow peas to go with it.  I just added the trimmed snow peas to the steamer basket of my rice cooker and served them plain.

The original recipe calls for 1 1/2 pounds of shrimp. I used what was left in the bag,  maybe 1/2 a pound.  The sauce was great though and the extra went well with the rice.  Since I was only feeding two it worked out great. 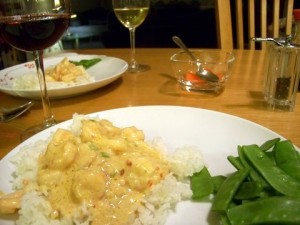