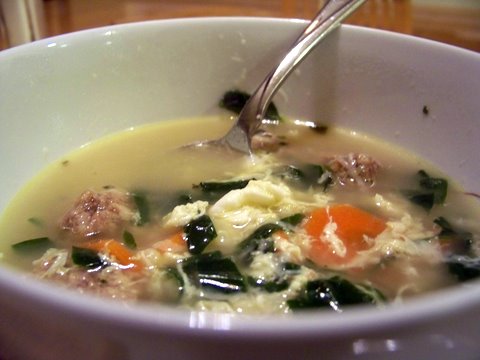 This was originally a totally ad hoc soup but it has become a family favorite. I make a soup of broth, tiny pasta and carrots (we call it Frog Eye soup, after the pasta) but then one day I had started making that and decided to turn it into a meal and added some spinach and meatballs, then read about stracciatelle soup somewhere so added the eggs.

When my daughter came home from school today feeling a bit sick she asked for it for dinner.  I normally use chicken broth but had turkey broth in the freezer now so that’s what I used. I luckily had a large supply of baby spinach leaves in the frig that I’d bought a few days ago.  Last time I made meatballs, I made some regular size and some tiny ones thinking of this soup, so used the last of the tiny ones up tonight.  I love having building blocks in the freezer like this. (I used the rest of the tiny meatballs in some baked ziti earlier.)

Pure comfort food yet full of protein and vegetables.