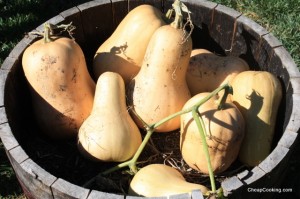 Butternut Squashes from the Garden

I’ve been experimenting with new vegetables this winter and the butternut squash has become a favorite. I kept seeing recipes for Butternut Squash Soup and finally got a chance to try make some this weekend. Dang, it was good! I had a recipe from Bon Appetit that I’d been eyeballing, but then searched online and found this one at Elise’s Simply Recipes and decided to go with that one. They both had an apple with the squash, but the Bon Appetit one had no carrot and celery. I always think of sauteed onion, carrot, and celery as a ‘three sisters’ kind of base for so many things. They smell heavenly cooking and are the basis for some many good things.

I served this soup as a first course for some turkey Tetrazzini, using some leftover diced cooked turkey. I didn’t actually vary much, unusual these days, but the recipe just sounded “right” as written. I did saute the vegetables in a combination of olive oil and butter, as I normally do. And I had thawed 6 cups of chicken broth and only needed 2 for the turkey Tetrazzini so used a bit more broth here.

I served this again as leftovers last night, with some barbecued pork tenderloin and sautéed apples. It is really quite good!