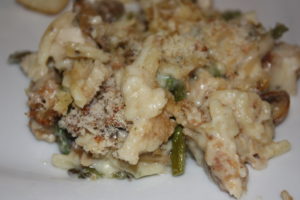 I made chicken cutlets for Sunday dinner and, as usual, I made spaghetti with oil and garlic (olio e aglio) as a side dish. I had some of each leftover and rather than just reheating the cutlets, I decided to make something different from them – chicken tetrazzini! This made use of the leftover spaghetti as well.  I had mushrooms and asparagus in the vegetable drawer and decided to add those as well. This came out great. I didn’t really measure much so I’ll give directions few measurements.

Basically, you need cooked chicken, spaghetti and vegetables. Break the spaghetti in half and cook it in boiling salted water according to package directions if you need to. Cut or shred the chicken into bite size pieces.

I was using leftover chicken and spaghetti so only needed to cook the vegetables.I heated a bit of butter and oil in a skillet and added the sliced mushrooms, salting them lightly. My asparagus was pencil-thin so it didn’t need very much cooking time. I cut it into 1″ pieces and added it to the mushrooms a couple of minutes before they were done. Set the vegetables aside on a plate.

Now make a white sauce in the same skillet, then add some grated Parmesan cheese to it and stir in everything else.  I made the white sauce with a mix of milk and chicken broth.

Pour this into a buttered baking dish. Mix together some bread crumbs and Parmesan cheese and sprinkle that across the top, then bake at 275 F for 30 minutes or so.