Home » Learn About ... » Make Ahead » Cook Chicken Ahead and Freeze

A few days I roasted two chickens. I like to cook chicken ahead and freeze it in small portions. We had part of one for one dinner, then a day later I pulled all the meat off the two carcasses, and made LOTS of chicken broth with them. I cubed the meat and then divided in half. I roughly followed an idea from Cheap. Fast. Good!

. Their idea of batch cooking follows my mindset. I don’t really do freezer cooking in the sense of cooking whole dishes for the freezer, but I often do stuff like this, what I call “building blocks.” It relieves some of the time crunch and effort but is still flexible. I can turn the cooked seasoned chicken into many things. 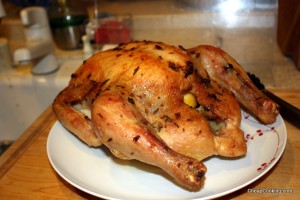 I sautéed an onion and some garlic, then added a few cups of cooked cubed chicken to it and seasoned with some Worcestershire sauce. I packed it up and froze it for later. Do this is whatever size packages work best for your family.  You can season the chicken lightly now and then add more spices later when you reheat it or add to a casserole. If you made chicken broth, put some of it with the cooked chicken when you freeze it to help it stay moist.

How to Use the Cooked Chicken

They have half a dozen recipes suggested for using this up, including chicken stew, burritos, a curry, a casserole with green beans, a pasta dish, and a lo mein dish.

The other meat I left plain and made Barbecued Chicken and Black Bean Burritos for dinner tonight with some of it, then froze the rest for later. It will probably show up as a chicken pot pie or creamed chicken or King Ranch Chicken.

I’ve got a whole long list of things to make with leftover chicken here.