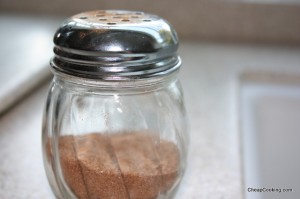 Vary the ratio to suit your individual tastes.

Mix together and store in a jar.  I usually use a bit more cinnamon than this but this is a good starting point I think.  I tend to just mix it up by color at this point.

I swear I saw this for sale somewhere at some outrageous price and I thought “Really?!”  It’s sugar and cinnamon, c’mon.”  But then I thought I should post this as people may not think of mixing it up ahead of time. When I was younger, I only used it for toast and would just sprinkle the toast with sugar and then cinnamon.  But it is quite handy to have around for baking.