Home » Side Dishes » Vegetables » How to Cook Artichokes 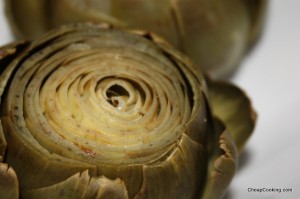 I’m often asked how to cook artichokes. I grew up mostly in California and we ate a lot of artichokes.  I only remember my mom boiling them in water and serving with mayonnaise and lemon juice, which is still a favorite of mine.

We love artichokes–so much so that I have 3 plants of my own. Oh, actually 4 now but the new one won’t produce until next year if it survives in the chicken yard. (My experiment to see what can survive there! So far squash and pumpkin plants do well as long as I protect them when they are little and line stones around the plant so the hens can’t scratch right at the base.)

I grew up eating artichokes prepared very similarly to this. I think the garlic clove is my addition.  But I could be wrong. I’ve been cooking them this way for so long I don’t even remember.  I like to cook them ahead of time and serve them cold, or at least cool/room temperature.

How to Prep Artichokes

Artichokes will discolor once you cut them open. Rubbing lemon juice on the exposed flesh keeps the discoloration to a minimum. 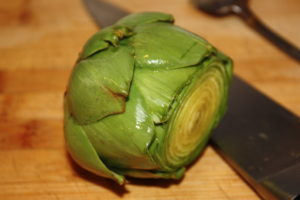 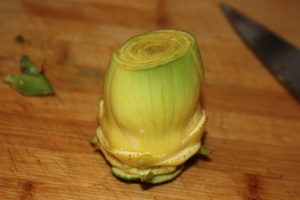 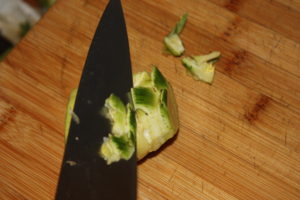 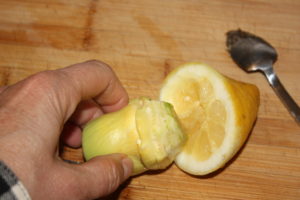 How to Cook Artichokes in Boiling Water

This is how I grew up eating artichokes, pulling them apart at the table and dipping the ends into a sauce until you got down to the heart.

We like ours with a dipping sauce of mayonnaise and lemon juice. Lots of lemon juice.  Other people like melted butter I hear…  We eat them down to the choke, dipping each leaf into the sauce and biting off the end.  Then remove the choke, the stickery part with a knife so you’re left with the heart (bottom) to eat. 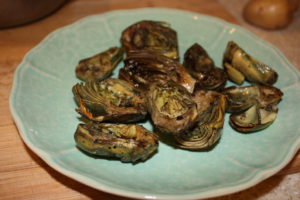 How to Grill Artichokes

The grilled artichokes are good plain, with just the salt and oil but they’re fantastic with a bit of vinaigrette poured into the center or as part of a simple green salad.

I’ve branched out and now have several other artichokes recipes.