Notice: Function add_theme_support( 'html5' ) was called incorrectly. You need to pass an array of types. Please see Debugging in WordPress for more information. (This message was added in version 3.6.1.) in /var/www/wp-includes/functions.php on line 5831
 Eggs and Omelets | CheapCooking ); 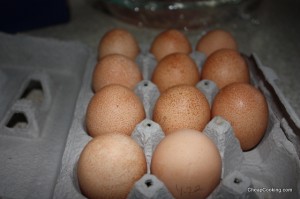 Spring must be here because the hens are laying!  I only have three and they are coming up on three and a half years old roughly so starting to slow down a bit in terms of egg laying.  Plus I have one that consistently goes broody (wanting to hatch out her eggs) after laying 15-18.  A good thing she’s beautiful and eat snails! 😉  But they still  lay enough that I generally don’t buy eggs except in winter. I’ve just learned not to give many away these days because the production rate is lower than it used to be.

My omelets are not fancy thrice-folded affairs although I do aspire to those.  I simply cook the beaten eggs in a large non-stick skillet, add whatever ingredients I have (some of which are pre-cooked) and fold the omelet in half to finish cooking.

For tonight’s omelet I sauteed some sliced green onions and a sliced leek in some butter, added some leftover ham to heat up, then put that in a dish while I cooked the eggs.  When they were ready for folding, I added the vegetables and ham, some diced Cheddar cheese and some dollops of sour cream, then folded the omelet in half.  No pictures sorry.