Hi, I’m Allison, Ellen’s youngest daughter. Tonight, my sister was out, so I decided to make dinner for my mom. It was my first time cooking a meal on my own, and mom enjoyed it so much that she told me I had to blog it.

I decided that my meal was going to be a breakfast for dinner type thing. I made fresh squeezed orange juice in our Vita Mix, and I fried up some potatoes that my mom had already cubed, parboiled, and frozen. (When the potatoes were cooking in a bit of olive oil and butter, I sprinkled on garlic powder, a pinch of salt, and seasoned pepper.)

For my main dish, I wanted to make an omelet, because I have never had one before. I mixed up a lot of different recipes and techniques from a book called “How to Cook Without a Book” and I made my own recipe. 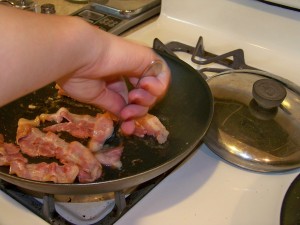 I started out by putting all the bacon pieces in my omelet pan and letting them cook until they were dark brown, flipping them over every couple minutes.

While they’re cooking, crack open all the eggs into a medium sized bowl and mix them until all the colors blend together. Set aside.

Chop the onion into about 1/4 inch pieces, put in a bowl, and set aside.

By the time you have done those, your bacon will probably be done cooking. Lay out a paper towel on a small plate and put the bacon on top, then cover them with another paper towel.

Leave all the grease in the pan and add the chopped onion, and saute until they become limp and darken a bit in color, then put them back in the bowl and dump out some of the grease.

Then you will pour your egg mixture into the greased up pan, still gently until it starts to set, then leave it alone until it’s a little soft and wet on the top, but not liquidy.

Take the bacon out and chop or tear it into small, half inch pieces.

On half of your eggs, sprinkle on the bacon, then the parsley leaves, then the onions and the yogurt. 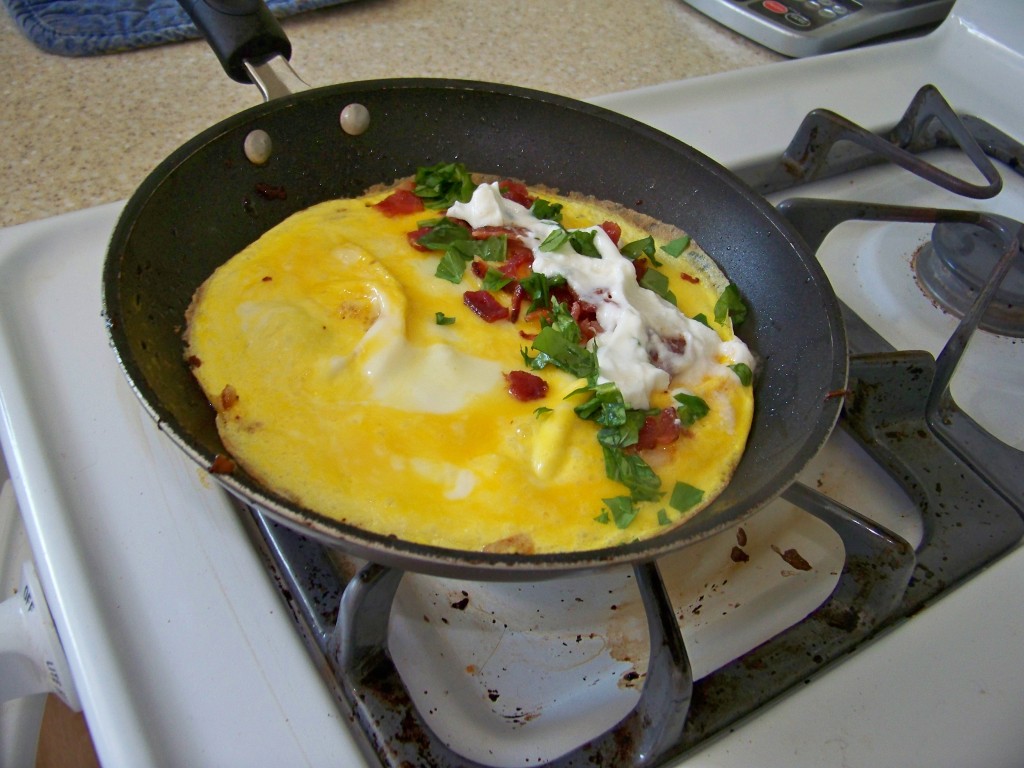 When I put the yogurt on, I scooped some into a spoon and shook it gently over my omelet so that small portions could be distributed equally.

Then, fold the empty half of the eggs on top of the other half.

Mine broke, but it still tasted delicious.