There’s something to be said for wrapping food up in foil and cooking it all together. The kid who might complain about the same ingredients in a different presentation might happily eat it this way! The other advantage of this is that you can easily adjust the quantities to suit smaller or larger appetites or leave one particular vegetable out if someone has really strong dislikes. My kids don’t like onions so I left them out of their packets. The final advantage is that you can make the packets up ahead of time and just pop them in the oven or on the coals at the appropriate time. (However, cut potatoes will turn nasty-looking so don’t mix them up too soon.) If you parboiled the vegetables a bit first, I bet these would make handy freezer meals too. 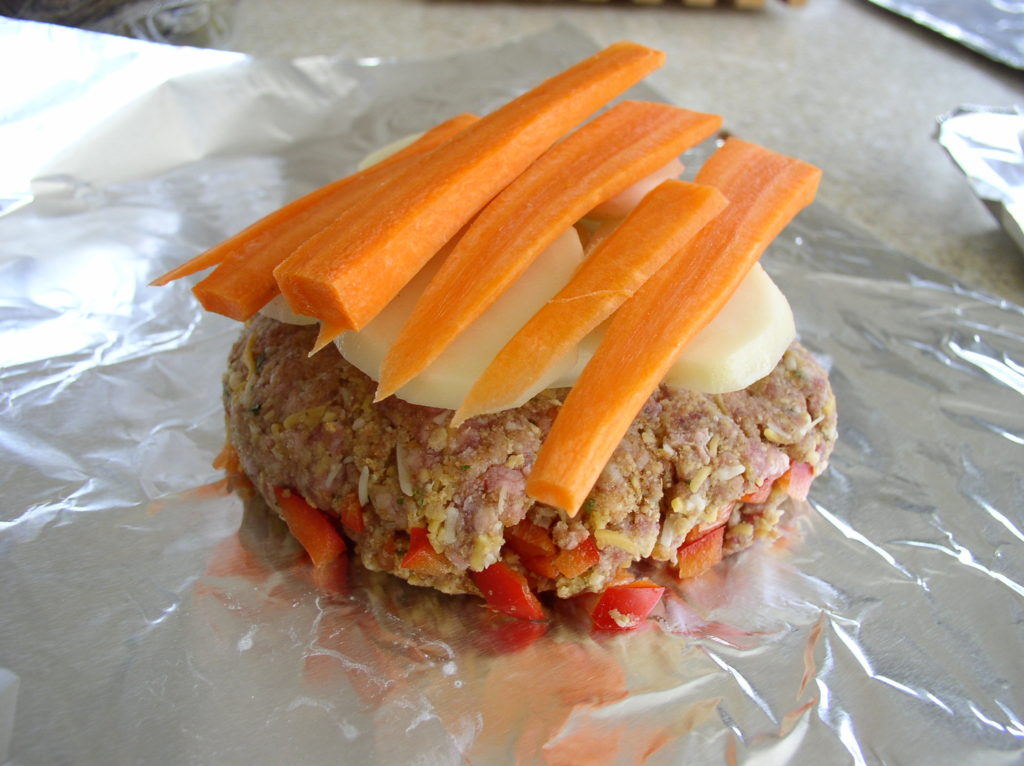 People on a cooking list I’m on were raving about hobo hamburgers and someone posted a link to Paula Deen’s version of hobo hamburgers. I started there but made a few minor tweaks. First, I cut the meat down to a pound for 4 burgers, rather than a pound and a half. I only put the onions on mine. I used Russet potatoes and fewer carrots because everything just wouldn’t fit! I didn’t have a green pepper so I just left that out. I did mix up the “house seasoning,” a mix of 4 parts salt, 1 part garlic powder, and 1 part pepper, because I use those things a lot and can see it would be handy to have it around like that. If you don’t want to mix up the whole batch as she posted, just use about 1 tsp salt, 1/4 tsp pepper, and 1/4 tsp garlic powder. Not exactly the same but pretty darn close.

I’m actually making these again tonight with a few other variations. First, I don’t have any bacon since we cooked up the last of it for my Mother’s Day breakfast. The bacon probably lent flavor last time, but it was soft and no one really wanted to eat it anyway. Second, I did have a red pepper, so diced that up and added it to the meat mix. Oh, and I’m also using Italian flavored bread crumbs because I bought them by accident.