I keep forgetting to take a picture of the peaches I have growing in the yard, Indian Blood Peaches. I got a few comments about them a while back when I mentioned them. I have two trees, started by a neighbor years ago and given to me, each in a separate coffee can. He told me to leave them in the cans for a year and then plant them. I had a cherry tree die in the meantime so planted one where it was and the other back in a bit more shade than it would probably like. But, with 14 fruit trees in a small suburban lot, beggars don’t get to be choosers. Both trees produce, but the one in the shade actually tends to break off branches more often and produce smaller fruit. They’re tricky to time as they seem to reach perfect ripeness and then fall to the ground within about 5 minutes. But they are delicious!

The other day I made a cobbler with them. We just ate the last of it tonight. You can see the red color. In fact, I initially wrote “cherry” cobbler after looking at the picture. They are a bit tarter than a regular peach, but are a nice freestone fruit. I added a bit more sugar to the cobbler mixture to account for the tartness.

Updating September of 2010 to show the peaches: 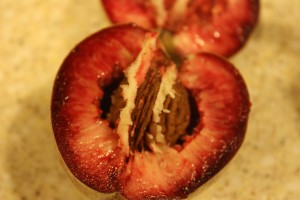 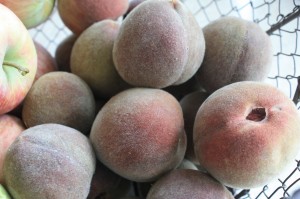