I have been cooking, but much of it has been in terms of canning and freezing and drying.  And it’s a whirlwind on the weekends and I forget to take pictures.

Yesterday I had friends for dinner. I marinated a flank steak in my mom’s standby flank steak marinade with olive oil, lemon juice, garlic and parsley. It really doesn’t get much better.  I also tried a new recipe, which I did take a picture of I think, which was roasted Roma tomatoes with pesto and bread crumbs and olive oil on top. They were great and I think the leftovers will show up in a pasta dish this week. And I roasted the tiniest red potatoes from my whiskey barrel potato growing adventure. I also used almost the last of my Indian Blood Peaches to make an easy cobbler for dessert. 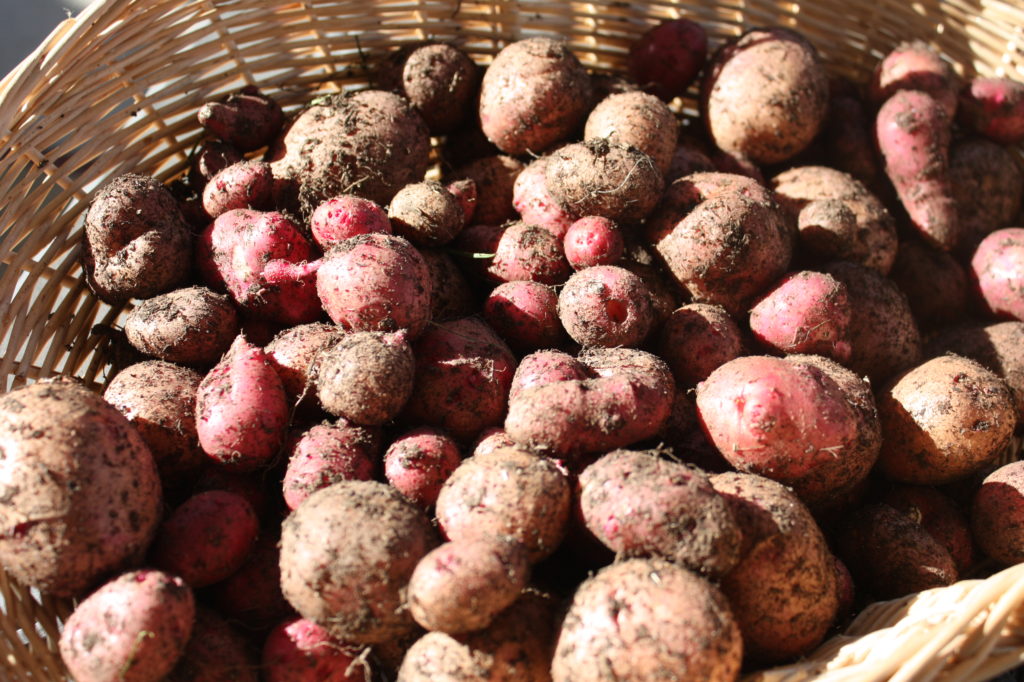 Today, I started by picking the ripened Anaheim chili peppers and roasting them on my gas grill, then putting them in a paper bag for a bit to steam. I then flash froze them so I can pull out roasted red peppers when I want. I left one in the fridge for a sandwich at lunch this week.

I also picked a bunch of Italian sweet peppers and strung them up to dry. My daughter loved the look of them so much she wanted a string in her room. I picked some of the Mexican chili de adobo peppers, much smaller, and made a string for her to hang in her room. I’ll cook with them after they’re dried!

I had enough Roma tomatoes to make a small batch of sauce. About 3 pounds of tomatoes that cooked down to 2 cups of sauce. I froze in 1 cup portions for pizza or pasta this winter.

I had enough pickling cucumbers for about a quart of pickles so found a refrigerator pickle recipe to try.  I had expected my cucumbers to be ready earlier but two of the plants have suddenly started producing so I think I’ll have at least another quart’s worth so may can 2 pints of pickles next weekend. Hopefully more but I don’t see many more starts.

No gardening this weekend but last weekend I planted some pole beans I’d started from seed in a flat a month ago and started some lettuce, carrots, radishes and beets from seed in the space where the red cabbage was growing.  I love that red cabbage sauerkraut I learned to make this year and will definitely be growing that again! I think my yellow crookneck squash is about done, although my zucchini is still going.   I don’t usually do much of a winter garden but I do want to plant garlic for sure!  And maybe broccoli and more cabbage and carrots.