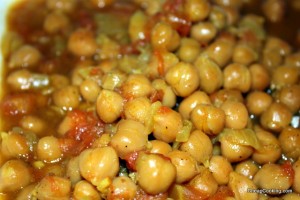 I’m not sure if the latter dish qualifies as Indian or not. I got it from Mark Bittman’s How to Cook Everything Vegetarian: Simple Meatless Recipes for Great Food

. I first served it at a family meal as a side dish for omnivores and a main dish for vegetarians. It was gobbled up by everyone! It seemed to go well with last night’s menu though, so I added it as I wanted some variety and was cooking a lot, thinking of midweek lunches and such.

I’ve posted the recipe for butter chicken before. The only difference this time was that I actually used a purchased Garam Masala blend from Penzey’s. It saves a bit of work but I think the Cooking Light mix is quite good.

Second up was this Chana Masala (Chickpea Curry) recipe I found online.  I had no mustard seeds so just skipped that. I skipped the red chili pepper as well.   I used canned garbanzo beans and just simmered them with everything a bit longer.

Third was this lentil and potato curry with coconut milk. I added the extra butter and made a quick yogurt and cucumber raita to go with everything.  I don’t think I measured anything. Probably half a cup or so of yogurt (it was already thick so I didn’t drain it), half a cucumber, seeded and grated, and some salt.  I saw a recipe somewhere that added some grated radish to this that sounded good but I had no radishes. Maybe next time.