Notice: Function add_theme_support( 'html5' ) was called incorrectly. You need to pass an array of types. Please see Debugging in WordPress for more information. (This message was added in version 3.6.1.) in /var/www/wp-includes/functions.php on line 5835
 Margherita Pizza | CheapCooking ); 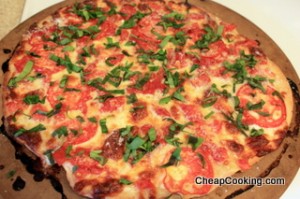 So apparently Queen Margherita of Italy had to visit Naples in 1899 to escape a cholera epidemic in northern Italy. A local chef made this for her, based on the colors of the Italian flag, and she loved it so he named it after her. True or not, the pizza is a fine example of simple is good.

I have tried lots of recipes for pizza dough. There’s a collection on that page.

I opted to make this a very thin pizza but you could do it however you like.  I took a pizza dough recipe that used 3 cups flour and used half of that for a pizza that fed 2 of us plus 3 slices left over.

I didn’t give many measurements here because so much depends! How sauce do you like your pizza?  How large is your pizza? How thin did you roll it out?  Did you prebake the dough a bit (which I might do next time to get around the not being able to preheat the stone)?

However, even the way I did it, my daughter and I were both marveling over how good it was!  And I’ve made pizza for years, but always opted to make a sauce and usually adding pepperoni or a bunch of veggies or both.  This was so simple but so good!