Last year I made several different kinds of dill pickles and these were our favorites! It’s my Mom’s Dill & Garlic Pickles. She sent me the yellowed newspaper clipping, bordered with Scotch tape. 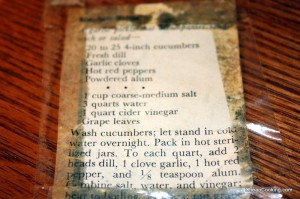 Last year, I didn’t add the alum but this year I did, just wanting to taste it the old original way.  I begged some grape leaves off my neighbor’s both years. They’re supposed to help keep the pickles crisp (as is the alum).

One of my favorite blogs on canning foods is Food In Jars. You can read her post here about removing the rings. She also has a book out, which I’ve not yet seen but think must be fabulous having been a regular reader of her blog this past year. (The book is here on Amazon, Food in Jars: Preserving in Small Batches Year-Round

. Disclosure: I’ll make a <very> small bit of money if you buy after clicking.)

I made 9 quarts tonight after dinner. It was too hot earlier in the day to even think about turning on the stove and boiling water. But I’d been saving up cucumbers all week and my friend had dropped off the grape leaves this morning so the pressure was on! 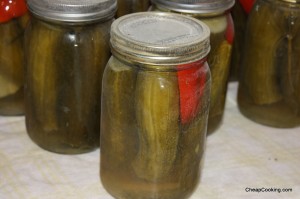