Notice: Function add_theme_support( 'html5' ) was called incorrectly. You need to pass an array of types. Please see Debugging in WordPress for more information. (This message was added in version 3.6.1.) in /var/www/wp-includes/functions.php on line 5835
 Pie Crusts | CheapCooking ); 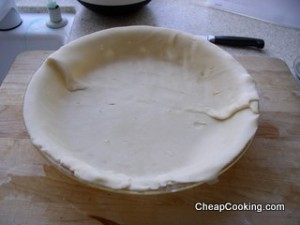 Here are recipes and detailed directions for making pie crusts. First, is the old-fashioned shortening based recipe that is pretty standard. Following that is a low-fat version that tastes great as well. Pie crusts do take a bit of practice but once you learn how, you’ll save a quite a bit of money compared to buying pre-made crusts. A long time ago I calculated the cost of a regular pie crust to be about 11 cents. And even if they don’t look pretty, they still taste good! Prices on everything have gone up but you can figure this one out on your own based on current prices.

If you have a large standing mixer (e.g. Kitchen Aid) or a food processor, you can easily mix the pie crusts in one of them. 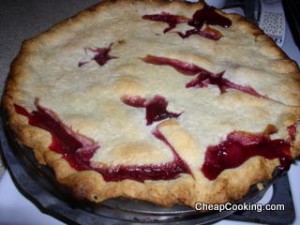 Mix together the flour and salt. Cut in the shortening using a pastry blender or your mixer until the pieces are like small peas. Add the water one tablespoon at a time. Toss with a fork or use your mixer. Turn the dough onto a floured cutting board and divide in half if you made two crusts. Flatten with the palm of your hands into a disc. If you have time, wrap in plastic and refrigerate half an hour or so. It will make rolling the crust out a bit easier.

Make sure the board is floured and sprinkle a little flour on top of the dough as well. Use your rolling pin to roll from the center out at different angles until the dough is about 1/8″ thick and as round as you can get it. (This will get better with practice!) If you really mess up the shape you can patch a piece from one side to the other but be careful rolling there as it will be more likely to stick to the rolling pin.

Fit pastry into the pie plate. An easy way of doing this is to fold the crust in half or fourths and position it, then unfold it. If you’re making a single crust pie, trim the crust so that you have about 1″ overhang and fold the overlap under. Pinch with your thumb and forefinger all around the pie to make a fluted edge. If you need to prebake the shell, bake at 450 for 10-12 minutes.

If you’re making a two crust pie, trim the crust to about 1/2 ” overlap. Fill with the filling. Lay the second crust on top, tuck the top crust under the bottom one to seal it and then pinch it together with your thumb and forefinger. Cut slits into the top crust to allow steam to escape. 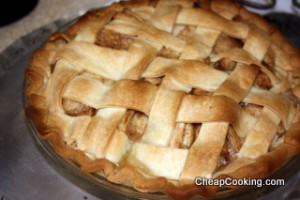 At some point I’ll write up instructions for making a lattice pie crust but so far my eldest is the expert at this. For now I will just say to remember those placemats you used to make in kindergarten where you wove different colored papers together. It’s really the same thing.

Mix together the flour and salt. Pour milk and oil into a measuring cup but do not stir them together. Pour the oil and milk all at the same time into the flour and stir with a fork. The dough looks moist but it isn’t sticky. Press it into a smooth ball, then cut it in half. Flatten the halves slightly.

Roll the dough between two sheets of waxed paper. Peel off the top paper. Lift the dough by the corners of the paper and place in your pie pan. Peel off the paper. Adjust the pastry in your pan as needed. Do the same for top crust after you’ve put in your filling.

If you’re baking a two crust pie, you need to “vent” the top to allow steam to escape. You can, of course, just cut slits with a knife. But if you want to get cute, you can cut little shapes out of the top crust and then lay those cut out pieces on top of the pie. Tiny little cutters like these Mini Metal Cookie Cutter Set