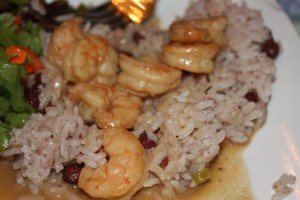 I think I’ve actually blogged about both of these before… Ah, the sign of old age for a blog. Do I repost the recipes or just include links? I think I’ll repost them and save you a few clicks. These are from Mark Bittman’s The Minimalist Cooks Dinner

Shrimp, I’m discovering, is (are?) one of those great weeknight menu items. They cook up fast. They can stay in the freezer until you need them. And they’re a treat, at least in my household. This is NOT CheapCooking in a monetary sense; but it makes a nice weeknight meal in a short time.

This is an easy delicious way to prepare shrimp. And there's only one pan to clean!

My eldest wanted this over pasta because the last time we had shrimp I served it/them with pasta. But tonight, I cooked up the coconut rice from the same book (although there is a mistake in the ratio of liquid to rice!). I remember this early blog entry in particular because it was one of my first that got a comment and I was thrilled! (And it was a positive comment!) But I just and went and looked for the comment and realized it was from before Blogger supported comments, so it’s gone, alas. It was from someone from the islands (Jamaica if memory serves) who said they made this all the time!

I always mark variations I’ve done in my cookbooks so had noted the incorrect proportions the first time. Saved me some thinking time tonight.

The combination of the shrimp and this rice is just perfect to me. I pour some extra shrimp “sauce” over the rice, put some fresh ground pepper on it, and could eat way more than I should!