Notice: Function add_theme_support( 'html5' ) was called incorrectly. You need to pass an array of types. Please see Debugging in WordPress for more information. (This message was added in version 3.6.1.) in /var/www/wp-includes/functions.php on line 5831
 Summer Marinara Sauce for Eggplant & Zucchini Parmesan: CheapCooking ); 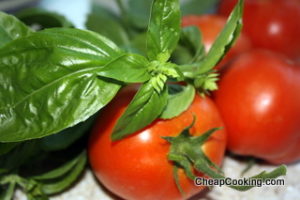 The two of us living here right now LOVE Eggplant Parmesan and I usually do something similar to this eggplant Parmesan recipe.   I’ve also made zucchini Parmesan. The first time I made that by just frying the zucchini but not breading them first and it definitely lacked a little something, although it was still good. The other night I made a summer marinara sauce with fresh tomatoes and basil from the garden.

I also had a few small Japanese eggplants from the garden that needed using up and LOTS of zucchini, so I combined them. I sliced them all lengthwise, dipped in egg, dipped in bread crumbs and fried, then drained on paper towels.

You can just cook the tomatoes with the skins and fish out large pieces or ignore them. Pop them in some boiling water for a few minutes first and then skin them before chopping.  Or cook everything together and run through a food mill to remove the skins and seeds.  I’ve done them all, depending on how much time and energy I have.

I made pizza the night I made it, then used what was left in this dish.

By the way, if you’ve got a glut of zucchini and/or eggplant, you can bread and fry then flash freeze the slices to make this later.

I’m not giving quantities here for the eggplant or zucchini Parmesan because you can adjust according to how many vegetables you have and how many you’re feeding. Leftovers are GREAT for lunch though!  And as I mentioned, if you have leftover fried slices, just flash freeze them so  you can grab them again later.

Put a bit of sauce in the bottom of a baking dish. Last night I used a 7×11 pan.  Lay the fried zucchini and/or eggplant to cover the dish. Spread more sauce across the top. Lay some grated mozzarella or sliced mozzarella cheese on top. Lay more fried zucchini and/or eggplant, more sauce, more cheese.  I just did two layers last night but have done 3 or 4.  End with mozzarella cheese and then sprinkle some grated Parmesan on top. Bake at 350 for 30-45 minutes. Let rest a few minutes before cutting into it to serve.

If you want, you can peel the tomatoes first by parboiling but I often don’t bother and just fish out the big pieces.